Supplementing dairy cows with linseed during the dry period

It is widely recognized that dietary n-3 fatty acids, particularly eicosapentaenoic acid (C20) and docosahexaenoic acid (C22), are important nutrients for humans. Research has shown their beneficial role in the prevention and management of cardiovascular disease, hypertension, and arthritis. Adding them to animal feeds has also been extensively studied as an indirect way to deliver them to the human diet through animal products.

One such example is linseed (Linum usitatissimum) which is a good source of unsaturated fatty acids, particularly of alpha-linolenic acid (C18:3n-3). More recently cattle studies have determined that dietary n-3 acts in ovarian structures and bull sperm influencing follicular and embryo development, as well as semen quality.

One other effect is that of modulating essential physiological processes in what is known the endocannabinoid system that primarily affects reproduction. This system consists of receptors called cannabinoid CB1 and CB2, the main endocannabinoids anandamide and 2-arachidonoylglycerol, and a group of specific enzymes N-acyl-phosphatidylethanolamine-specific phospholipase D, fatty acid amide hydrolase, diacylglycerol lipase and monoacylglycerol lipase.

It plays a critical role in the reproductive system participating of events such as gametogenesis, decidualization (changes to cells of the endometrium in preparation for, and during, pregnancy), implantation and placentation.

Supplementation of n-3 FA during early postpartum modifies this endocannabinoid system in the cow’s endometrium by modulating the chemical composition and functionality of the immune cells, which affects the immune response. Few studies however have evaluated the effects of feeding linseed during the transition period on milk composition and FA metabolism.

Advantages of lignans from linseeds

Another group of compounds called plant lignans are converted in the intestine to enterolignans that can be assimilated by the human body. The literature has also reported positive effects of these enterolignans in reducing cancer risk (prostate, ovarian, and breast cancers), osteoporosis, and cardiovascular disease.

Lignans may protect against certain types of cancer, particularly the hormone-sensitive cancers such as those of the breast, endometrium, and prostate by interfering with the metabolism of sex hormones. Linseed lignans improve the clearance of circulating estrogen, and they inhibit the binding of sex hormones to cell membranes by blocking their receptors.

Plant lignans (phytoestrogens) as those present in linseed have however lower bioavailability in the human intestine when compared to those synthesized in the rumen. Of the lignans in linseed the main one by far is secoisolariciresinol diglucoside which is converted by the rumen microorganisms in enterodiol and enterolactone. The richest known dietary source of enterolactone precursors are both linseed and sesame seed. Enterolactone concentrations are lower in breast cancer patients than in healthy controls, indicating their potential anticarcinogenic activity.

A recent study (Bailoni et al. 2020) was designed with the objectives to evaluate the effects of supplementing dry dairy cows with flacked linseed on milk production and composition in early lactation (30 days post calving), as well as the plasma concentration of enterolactone. Italian Friesian dairy cows expected to be dry at approximately the same time were divided in two groups according to parity (2.25 ± 1.72), days open (117 ± 66), and milk production (9.86 ± 1.60 kg of mature equivalent milk).

At the beginning of the dry period pairs of cows were assigned to a control (CTR) or experimental linseed supplemented diet (LIN). At the end of the experiment there were 38 cows in the CTR and 35 in the LIN groups. The LIN group received 200 g/head/day (2.13% of DM) of flacked linseed and the CTR group a blend of ground soybean meal and corn grain to balance for isoenergetic and isonitrogenous diets. After calving cows from both the CTR and LIN groups were fed once a day the same total mixed ration (TMR) formulated according the NRC 2001 requirements.

Enterolactone was measure in plasma of both groups of cows during the dry period, and in plasma and milk during the first 30 days of lactation. There was a carry-over effect of C18:2, C18:3 n-3, and C20:5 n-3 in milk which at day 4 of lactation was higher in the LIN compared to the CTR group.

Enterolactone in milk of the LIN group was observed at the 15-sampling day. Results showed that there were changes in the fatty acid profile in milk in the first few days of lactation. They also demonstrated that the carry over effect between the dry period and lactation was short-lived. It is possible that these results could vary with higher linseed supplementation.

More research needs to be conducted to obtain more solid conclusions as to the amount of linseed to supplement to effect consistent changes in the enterolactone concentration in plasma of cows. 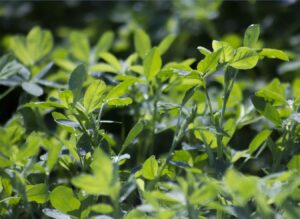 Legumes
Alfalfa nutritive value when harvested at different maturity stages, what should we expect? Read More » 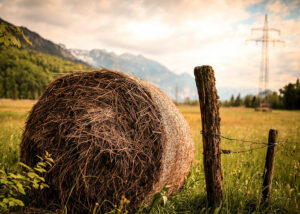 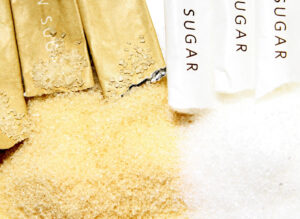