How does familiarity affect the integration of cows into their group after calving?

Dellait » Dellait Knowledge Center » Management » Welfare » How does familiarity affect the integration of cows into their group after calving?

Changes in social settings can have pronounced effects on animal physiology and behavior. In a dairy farm, animals are periodically regrouped to facilitate management in terms of milk production or stage of lactation, with many cows experiencing four or more reassignments during their lactation.

During the reunification, social ties could improve adaptation and reduce the stress that arises in the new physical and social environment. In livestock, heifers that integrate in pairs adapt faster compared to those that do so individually.

One way to measure livestock welfare is resting behavior. Dairy cows in lactation must synthesize large amounts of milk and need enough resting time, preferably lying down, in order to maintain this normal biological function. Lying down is a highly motivated behavior and is used as a valid indicator of social stress and well-being.

The resting phases in livestock are highly synchronized under semi-natural conditions. In intensive breeding systems, behavioral synchrony is counteracted by factors such as space reduction or high population density. Therefore, behavioral synchrony is a measure that indicates there are no behavioral disturbances and that cows also have enough resources and therefore are in a state of well-being.

One study (A.K. Gutmann et al., 2020) examined the effect of familiarity among dairy cows in their adaptation to the milking group post calving. Of interest of the researchers were the combined effects of group introduction and social relations on cow laying behavior. Since the reactions are different depending on whether the cow is primiparous or multiparous, both groups were evaluated separately.

The study was conducted in a group of high-producing dairy cows right after calving and that were together for approximately the first third of the lactation. An accelerometer was placed to record their activity in terms of “lying down” or “not lying down.”

Cows remained together in a pen before calving, and a few days before delivery they were taken to an adjacent pen which allowed full eye and olfactory contact and partial physical contact with their previous groupmates.

During observation periods, “new” cows were introduced into the group 2-4 animals at one time (average of 2) at 4-16 days (average of 6.5) post calving. The data available at the end included 23 “days of integration” with resting data of 1 to 3 new cows (average of 2; for a total of 13 primiparous and 33 multiparous newly introduced cows). Resident cows had been in the group for an average of 6 to 7 weeks.

Two types of behavioral synchronicity were defined; one as “group”, that is when an individual performs the same behavior as most of the group, and another “dyadic”, when one individual cow performs the same behavior compared to another. At the dyadic level, the new primiparous and resident cows formed 628 days each, and the new multiparous and resident cows formed 1,545 days each, while the rest of the cows were present in the group on the respective days of integration.

It was observed that newly introduced primiparous spent less time lying down than resident cows. Shorter resting times may reflect a state of excitement caused by recent experiences of first calving, transfer to an unknown environment, encounters with unknown animals, and milking.

In addition, dyadic synchrony was reduced in new primiparous compared to resident cows. These results confirm that the introduction into the milking group is a challenge for primiparous cows, as they fail to get enough rest and have difficulty behaving in coordination with their groupmates.

With regards to multiparous cows, the introduction of new cows did not adversely affect their time lying down or their synchrony compared to the residents. In fact, newly introduced multiparous laid down a little longer than their resident groupmates, indicating that they faced the group well and rested long enough.

Relationships established at an earlier age persist in the long term

Recent familiarity had no effect on the duration or synchronicity of rest in primiparous or multiparous cows. In contrast, early familiarity affected cow behavior in several ways.

On one hand, dyadic primiparous cows with early familiarity behaved more synchronously than other dyadic cows, demonstrating that cows that had contact in the first few months of life recognize each other and coordinate their resting behavior.

On the other hand, the presence of animals with early familiarity decreased the resting time of the new primiparous, which could be explained because during the 24 hours after the introduction when this behavior was recorded, the newly arrived primiparous attempted to be active when animals with early familiarity were active, thus reducing their resting time.

With regards to the multiparous cows, the number of group companions of early familiarity present was positively correlated to the synchrony group. This seems to support the concept that for experienced animals the presence of groupmates with early familiarity makes it easier to coordinate individual behavior with that of the entire group.

The results indicate that the effects of postpartum reunification and the familiarity of members of the current group on resting behavior are different in primiparous and multiparous cows. 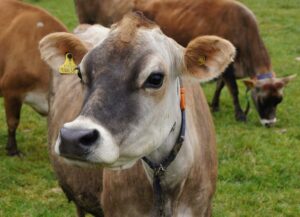 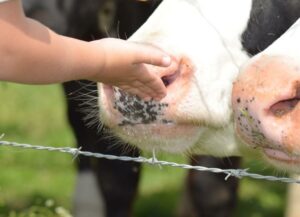